As part of my Ideation and Prototyping class at NYU I will be creating a game prototype and writing about the process each week.

For the first entry, I decide to create a few pixelart sprites to use in Unity game prototypes. They are based on an organizational system that uses rows to distinguish angles and column groups of 2 to 4 to distinguish individual frames in an animation. This makes the code for sprite generation simpler to reason about using meaningful indices.

The first is a pixelart player avatar for a game that can move in 8 directions and handles two basic actions: shooting and striking with a sword/melee weapon. 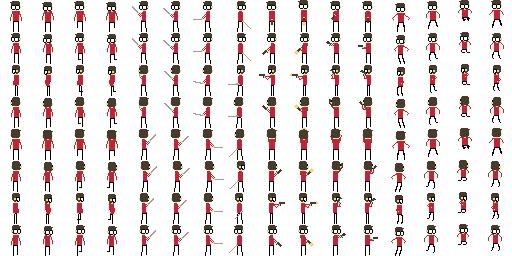 Below are some of the animations created from the sprite sheet:

Here is the animated gif form: