The week before last on 4/29/2019, I attended a really awesome talk at the NYU MakerSpace called Designing for Machine Intelligence with Adobe’s Design Team. The talk was lead by two members of Adobe’s Design Research team: Lisa Jamhoury and Patrick Hebron The talk was actually a sort of hybrid of a talk and workshop. The first half being a straight-up talk and the second being more of a workshop.

The first portion (the talk), was a really great disambiguation of Machine Learning and Neural Networks by Hebron. In that portion he did a good job of taking these relative niche concepts and breaking them down into very accessible terms. In one slide, he had a made a very insightful observation about how conventional programming is a form of inductive reasoning while learning systems (machine learning / neural networks) are a more a form deductive reasoning, turning observations into generalizations/instances.

He mentioned that in conventional programming, a programmer must understand the “general cases” of a program before setting out to write code that expresses the program. Where as learning systems begin with many many examples of problems and from that derive program, without a general case. Because of this, conventional programs and machine learning algorithms differ in these two ways:

In general, his talk was a very well organize crash course into what learning systems are and it more-or-less mirrored the content of one of his blog posts on the subject.

The workshop portion of the event was mostly lead by Lisa Jamhoury and Patrick Hebron. This portion challenged the attendees to design a UI based on two user stories she provided. 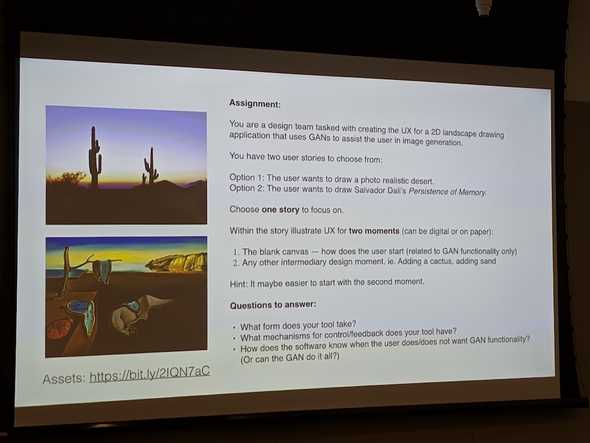 From this prompt she split us up into a small group that brainstormed about solutions. After about 45 minutes, my group came up with a handful of sketches for a UI concept of a GAN (Generative Adversarial Network)-powered, image editing canvas:

Overall, the experience was quite a blast. I hope they come back and do more events at NYU.